Underdogs in Education (Part 1): For-Profit Schools as a Case Study in Game Theory

This is Part 1 of a Two-Part Post on Education in America.

David and Goliath, one of the most well-known stories in the bible, provides a good framework for evaluating competition between asymmetrical combatants.

When you’re an underdog, you don’t win by playing by the book. You have to take risks and embrace schemes that may increase the odds of devastating loss for a chance at victory. You have to exploit edges wherever you find them, take your opponents into deep waters and drown ‘em.

Secondary education is an intriguing frontier for the “Revered Incumbent versus Lightly-regarded Underdog” battle. For-profit online schools competing with established universities for education dollars is a proving ground for asymmetrical combat strategy.

First, a word on traditional “brick and mortar” colleges:

There are a wide-range of schools, whose biggest-selling points might be academic rigor or storied sports tradition. I will focus on schools known for strong academics for this section.

Besides exposure to elite professors, students, and captains of industry, you’ve got a long-standing network ready to lend a hand at every turn. A degree from an Ivy League school, or a de-facto Ivy like Stanford or MIT, acts as a signaling mechanism, alerting the world that you’ve got  some intelligence, work ethic, and a few other talents.

Just the knowledge that you were admitted to one of  these schools is good enough for a lot of people.

For-profit schools are the “B-side” of this bout.

Most of these programs are based online, featuring a “no-frills” curriculum, with video instruction and meet-ups supplementing online course work. There’s more of an a-la-carté  emphasis to schooling rather than the conventional semester setup. Some  offer access to real-world practitioners and externships as part of  the experience.

For-profits have a lot to prove to the public, including demonstrating the quality of instruction and  workplace viability of their graduates.

(Part of this might be accomplished  by the students themselves, before they even enroll. The kinds of people most likely to embrace unfettered learning are likely to succeed no matter what school they attend.)

The costs of these schools is appealing, often $5000 or less per year for tuition. “Price” is a proverbial sling-shot for felling industry heavyweights and snatching a slice of a previously-impenetrable market.

An example of an underdog successfully waging war based on price:

ESPN NFL2K5 was a football videogame released by SEGA in 2004 to compete with Electronic Arts’ long-running “Madden Football” franchise. SEGA’s strategy  was to release NFL2K5 at a $20 price point, about half the price of Madden.

The gambit worked, generating thousands of buys right out of the gate (it helped that the game was fantastic in its own right).

Success was short-lived, however, as, EA Sports inked an exclusive deal with the NFL later that year, preventing any other company from using NFL players and teams in their games. This re-established EA’s monopoly on NFL videogames, ensuring that football fans would continue to endure mediocre releases year after year.

Note: I do not recommend competing on price as a strategy for winning customers. Discounting attracts shoppers who are more difficult to please and less brand loyal. Discounting worked for SEGA because there was only one major competitor in the market and sports gamers have unique interests. A rock-bottom price gave people a compelling reason to give a new entrant to the market a chance. 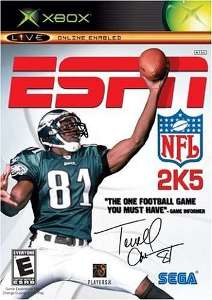 For students looking at lower-tiered traditional schools with expensive tuition, online schools represent an even bigger value. Students who don’t have the grades or funds to attend an elite university should take a look at these programs.    For-profit schooling is a viable option for people with  limited access to advanced degrees or those who want to learn a trade.     For-profit schools can operate within this niche, unless and until the big  boys decide to enter the field.

Traditional educational powerhouses are already dabbling in unconventional  education practices, so upstarts should be  pushing the envelope as far and as quickly as they can while it’s still uncharted territory.  The clearer the differentiation newcomers can make between themselves and the old guard, the better the chance of drawing quality applicants and sticking around. Providing excellent, targeted customer service to compensate for a lack of brand awareness is a sound strategy for competing. Education is evolving as preferences and fashions change, giving upstarts a chance to gain a foothold.

Even the age-old SAT Test is undergoing big changes in the pursuit of market share. The College Board will eliminate the ill-conceived writing portion of the test and the penalty for wrong answers.

(I’m not a fan of the score change for wrong answers–it will inflate test scores and make it tougher to differentiate which students understand a concept from those who just made a lucky guess.)

These moves are a thinly-veiled attempt to make the test easier, encouraging more students to take the test and pay all the related fees; Education will always be big business.

Since so many people go to college with the goal of getting a (good) job, we should also consider where employers might fall on the “Traditional vs. For-Profit” discussion.  And, no matter what route students choose for their education, tuition costs loom large.

In Part 2, we’ll look at how your choice of school can affect your employment prospects. We’ll also explore why colleges get away with charging such high tuition—and what we can do about it.

Want to implement an underdog strategy of your own? Contact me.