Why We Stopped Listening: Three Reasons You Suck at Public Speaking

This post applies to more than just formal speeches.

It’s about any instance where you have to address a group of people: be it a study group, an office meeting, or if you’re giving the closing prayer at church.

This NY Times article  touched on the growing market for speech writers for the average joe: Wedding toasts, eulogies and other occasions where you’re asked to say a few words—people want to give a good account of themselves.

You never know when this info will come in handy. It helps to know what not to do, so you can stay out of your own way.

I attended a function last month that featured a keynote speaker who prattled on for nearly an hour.

The speaker hurt his cause by operating without visual aids (which would have provided sensory stimulation and broke up the monotony)  and exhibiting an unyielding commitment to stating every last word on his paper.

The man was an expert in his field and his mechanical skills as an orator were above par; he just did a poor job of holding the audience’s attention.

His speech got me thinking about the reasons why so many people are awful  at public speaking.

One saving grace was that food was served before and during the speech, so the audience was less restless (although that may have contributed to the “snooze” ratio)  .

By the way, if you’re ever tasked with giving a speech, don’t ever do it immediately before a meal is to be served, especially if the time of day suggests the audience is several hours removed from their last meal.

If people are hungry, they will tune you out, resent you even, for being the chief obstacle stopping them from chowing down.

It’s like that one class you had immediately before recess when you were in school; the anticipation of what followed meant you couldn’t wait for that class to be over.

On to the mistakes…..

1) Your speech is too long.

When is the last time you heard someone say “I wish that speech was longer.”?

This article evoked memories of my elementary school gym teacher (whose name I still remember).

Whenever she prepared the class to play a new game, she would go over every single rule and detail, no matter how inconsequential it was to the flow of play.   Mind you, we only had gym class once a week, so, if we spent the whole period going over minutiae, we had to wait until the following week to actually play the game.    I remember how furious I would get, anxious to play the game.

And you know how much I love games and sports.

To some people, public speaking is an opportunity to be the center of attention, an excuse to show everyone how great they are.

(If you’re a church goer, you’ve witnessed the sanctimonious treat prayer like an audition for Def Poetry Jam.)

A lot of people think using ornate language to express an idea makes one sound more intelligent.   (I am aware of the irony in that sentence.)

Yes, diction is important, but it should never come at the cost of clarity.

The key to good speaking (and writing): “Brevity” is King. Say just enough to express your point in full–no more.   Don’t take eighteen words to say what can be said in eight.

Audience comprehension is the priority: the more you throw at a listener, the less likely he is to retain any single idea. You want to be comprehensive without being wordy.

“When you catch an adjective, kill it.” – Mark Twain

This is a corollary to the first point:

Be willing to shorten your speech.

If people appear to be losing interest in what you are saying, consider skipping ahead. Most people in the audience won’t know the difference. You are the only one who knows exactly how long your speech was supposed to be; don’t  project your feelings on to the audience.

Ironically, this is one of the reasons why people are so scared to speak publicly in the first place.

How can you tell if you’re boring the audience?

Scan the audience and note the body language: head nods and clapping can be misleading. You might be spotting the most passionate fraction of the audience. If you see a room full of glossy-eyed stares and heads being held up by palms, you know it’s time to wrap it up. 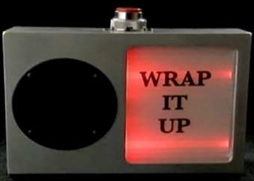 Of course, the very people who would benefit most from reading an audience are those least capable of doing it. Social intelligence is an invaluable attribute.

Fortunately, it can be taught.

You would be surprised just how good you can get when you practice.

And when I say “practice”, I mean the dedicated practice that creates stars. The type that mimics the conditions you’ll face when the lights are on and the exercises that push you out of your comfort zone.

A good presenter is going to spend hours creating something that the audience will have no trouble following.

Good speeches feature concise, natural break points that act like the bread crumbs in Hansel and Gretel–they allow the audience to see where the speech has been and where it’s going next.

When listeners get lost, they tune out.

Start running through your presentation weeks before it is due. You can spread it out over a long period of time: Twenty minutes one day, ten the next.

If you are using PowerPoint slides, start by rehearsing with your slides, running through your entire presentation. Push yourself. Try to memorize what you want to say at each point in the speech, looking only at the screen to change slides and signal a move to your next point. You want to get to the point where you can recite your entire presentation without the use of a single slide.

(Unless you’re giving a three-hour speech, which, you should know by now, is a terrible idea, this is an attainable goal.)

Do not attempt to memorize your speech word for word; focus on specific points you want to convey in each section instead. That way, you have signposts to guide you throughout your speech and you won’t panic if you cannot remember specific sentences.

If you rehearse twenty minutes a day, four times a week, you will get good in a hurry.   In all but the most extreme cases, you want to put in enough practice that you don’t have to rely on note cards when addressing an audience.

Most presenters don’t put nearly enough time and effort in giving the actual presentation. So afraid they’ll forget something important, they cram 800 words on to a single slide (in tiny font, no less).

If your entire presentation can be read from your slides, what good are you to the audience? What value are you adding to the experience?

You can probably get away with lackluster preparation for that presentation in your undergraduate business class or that PTA meeting, but in situations where you absolutely need to leave a lasting impression, these are the kinds of efforts that set you apart from the crowd.

It’s more upfront work, but that’s the price of excellence; if it was easy, everyone would do it.

Even if it’s just a thirty-second pitch to regale a potential employer or impress a first date, practice is critical.

A well-rehearsed hero doesn’t fall apart when he forgets exact wording–you’ve committed to memory the ideas you want to convey, so you can adapt on the fly–nor does he panic when a surprise element, like an unruly audience member or technical failure, derails a carefully-choreographed presentation. He’s less likely to experience the “deer- in-the-headlights” mental state that becomes a self-fulfilling prophecy, derailing a carefully-choreographed presentation.

You don’t want to be one of those people who stares at PowerPoint slides, do you?