Doubling Down: Not Just Good For Blackjack 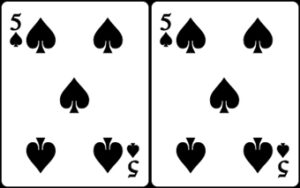 In Blackjack, you’ve got the option to “double-down” on 9, 10, or 11. You receive just one additional card and  double your bet, upping your reward—and risk—for that single hand. Without delving too far into the math, the double-down is an optimal play.

The double down is a good metaphor for life.

You’ve got to summon the courage to over-invest in a strategy when the right opportunities arise. You want to up the stakes when you’re in an  advantageous position. Single-minded commitment enhances your chances of success.

Scattered focus is like 10 chops on 10 trees vs. 100 chops on 1  tree—you get more done with a concentrated effort.

We’ve all got comparative advantages, the ability to accomplish certain  tasks more efficiently than others. It’s one of the reasons we take cars to the car wash instead of washing it ourselves, even though we could do it at  home for less money.  Devote your energy to the areas where it will have the most impact. Catering to all means you will satisfy few.

Think about spicy food offerings at chain restaurants. They’re closer to bland than hot because the restaurants prioritize mass appeal. Authentic spice will turn off tepid palates, so the recipe will be muted, relative to a dish at an ethnic eatery.

I tried the Angry Whopper once. The only thing “angry” was me.

Society rewards specialists. We want performers who are stars in their field of expertise. When you’re looking for a doctor, do you care how  well he cooks? You only care about high performance in the areas that matter.

In boxing, the most bankable stars have calling cards. Devastating power, like a George Foreman, or defensive brilliance like Floyd Mayweather. They are a pleasure to watch because they are so good at what they do, even if their greatness is limited to one aspect of the sweet science. The Sugar Ray Robinsons of the boxing world come once in a generation; few boast exceptional  punching power, speed, and defensive ability.

Categorical excellence is rare. People usually have their talent and skill  concentrated in specific areas.     Most of us are better off chopping a couple trees at a time instead of a couple dozen.     With specialization, you get good a lot faster. You’ve got more to show for your efforts with dedicated focus.

Of course, doubling down requires dropping activities to spend more time  on what’s most important.    If you’ve been putting in enough dedicated  practice, this weeding out process should not be foreign.

Examples of doubling down……

– Trading an hour of television time each day to read books on becoming a better communicator—to boost your relationships and productivity.

– A guitarist who trades garage jam sessions for 2-hour practices with specific objectives for improvement.

– A college quarterback with his eye on the pros giving up an hour of television time each week to study game film.

The old “winners never quit, quitters never win” mantra is true in instances  of quitting in the moment, times when you want to avoid the regret from running from temporary pain instead  of pushing through it.

Balance is overrated.  24 Hours in a day—we don’t have time to do everything. Identify your comparative advantages and triage relentlessly. Sacrifice and applied focus will take you where you want to go.