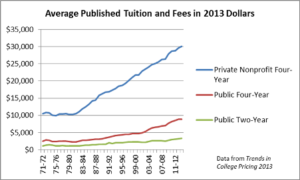 In Part 1, we discussed the battle between For-Profit schools and traditional colleges for education dollars and strategies underdogs can employ to unseat incumbents.

Do employers have a dog in this fight?

Since many, if not most, people rank “getting a job” higher than ”learning” on the list of reasons why they choose to attend college, this  is an important consideration.

Many employers support the standard “Four Years on a College  Campus” model for several reasons:[[MORE]]

If a candidate obtained admission to the school and survived the first two years,  they already know the potential to become a valued employee is there. Traditional enrollment also makes identifying and selecting new recruits much easier. Colleges act as unofficial head-hunters, organizing students into different strata based on GPA and extracurriculars (although the  correlation between academic performance and business success is  overrated).

You could liken it to the ease of catching fish in a barrel vs. fishing in open waters.

Imagine the headache of having to send recruiters across the country to small pockets of 20-somethings, hoping to find a few that passed muster and were willing to join the company.  It’s too inefficient.

(Yes, some businesses have embraced the internet as a cost-effective recruiting tool, but others have demonstrated technological IQs that rival a bar of soap).

Does this mean everyone should attend a traditional university? Nope.

An online school that teaches a particular set of skills, like cybersecurity or forex trading might be more attractive to employers who need people with a narrow, highly-developed strength.   Acute focus in lieu of the well-rounded education  found on college campuses. You can even throw subject matter experts who create online tutorials independent of schools into this category.

The pedigree of your diploma carries more weight in certain fields. “Who you know” and “where you’re from” are points of emphasis in finance and politics. For other career paths, like software development and sales, you may not even need a high-school diploma—they only care about the bottom line.

If you’ve read enough of my work, you know one of the keys to getting ahead in life is understanding why people do what they do. Winners understand the game and who makes the rules, instead of letting the game run all over them.

So, which school is better: traditional or for-profit?

Like many dilemmas, the answer depends on who is asking the question.    No matter what schooling you pursue, your education is your responsibility. You determine your level of competence, not the  media, the president, or the teachers’ unions.

So, what does this school comparison have to do with tuition prices? Doesn’t everyone deserve a college education at a reasonable price?

Let’s look at why tuition costs are sky-high in America.

Ironically, the “everyone needs to go to college” refrain has driven tuition prices through the roof, making it difficult for many to enroll. Government officials exceeding  constitutional authority and handing out $50,000 loans like candy hasn’t  helped matters. We’ve created an artificial price floor, pushing  tuition prices higher than they might be if loans weren’t so readily  available.

The easier it is for students to acquire educational loans, the higher  tuition prices will rise.

Colleges exist both to educate and make money. When they aren’t soliciting donations from  alums and corporations, they’re raising tuition rates. If they can get John  Q. Student to pay $45,000 a year for college instead of $30,000, they’ll do  it.

It would be nice if college was more affordable, but we have to deal with reality. Denouncing colleges for charging so much for tuition is similar to blaming big-box stores for opening on Thanksgiving Day and  fanning the flames of Black Friday hysteria; if no one wanted to shop on  those days, stores wouldn’t be open.    Businesses rarely create consumer demand—they’re a reflection of existing  preferences.

If simply presenting an item to the public were enough to encourage widespread purchase, we wouldn’t have to pay people to eat their vegetables.

The high demand for college education  ensures tuition prices stay high.   Not everyone needs to go to college to make a good living. The trades represent a viable alternative, and, in this day and age, “trade work” includes computer training like software development.

(To be clear, if money is not an issue, I recommend everyone go away to college [or any non-military experience where you leave home for months to learn something with other people in your age group]. College is one of the biggest stages of social growth in the human life cycle.   )

When greed, short-term thinking, and near-zero accountability pair with billions of dollars, the creation of a moral hazard is a near certainty. You can’t be surprised when people misbehave in situations with  little oversight.

The only way tuition prices will fall–or at least, normalize—will be  when government gets out of the student-loan business and parents and students start asking themselves some hard questions.

Fantasy Football 2012 Update (Week 5)
Report: Army has Too Many Whites, Men at the Top
How To Split The Bill: Tipping and The Group Dining Problem

Underdogs in Education (Part 1): For-Profit Schools as a Case Study in Game Theory