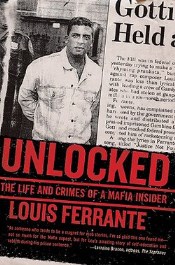 Flights from New York to Nigeria can be as long as 18 hours.

I grabbed a few books to read in the airports and on the planes.

Among those was Unlocked, the autobiography of former mobster Louis Ferrante. I bought Ferrante’s other book, Mob Rules: What The Mafia Can Teach The Legitimate Businessman, a couple years earlier; it was fantastic.

Unlocked did not disappoint, providing the backstory behind many of the anecdotes presented in Mob Rules.

I’ve invited Mr. Ferrante to the blog to share more of his story.

How did you first get into The Mob? Was it a goal as a kid? Did someone–or something–steer you in that direction?

Evolutionary process. If you’re robbing and stealing left and right, your reputation grows. Your network grows. Before you know it, the people you are meeting are bigger and badder and they bring you in.

You might have friends or family that were already in that world in a particular crime family and they naturally gravitate towards that particularly family.

Along with experiencing a firefight during war time, relegation to a jail cell is one of the situations where people resolve to make big changes if they emerge intact. And, unlike New Year’s Resolutions, those covenants tend to stick. Did you have any moments of clarity while incarcerated?

There was a specific incident in the hole where I had words with the captain of the guard. Someone else did something and I wouldn’t give up his name. The guard called me an animal.  I reached through the food slot and grabbed his tie.

I said, ‘Wow. What did I do to myself?“ I questioned the life I lived and the people around me; how much honor did we really have?

I decided to change one way or another, become a different person.

During your last prison sentence, you converted to Judaism. What drew you to the religion?

In a nutshell, I realized there was a ‘God’, a higher power.

I figured I’d just learn from the original text and go from there.

How did you fall into writing? Do you have a preference between reading and writing works of fiction vs. non-fiction?

I’m in a prison cell. I’m frustrated, realizing how much I’ve messed up my life. I figured I’d start reading, as I had a curiosity in my life. I asked a friend to send me some books. I started reading and fell in love with books.

After reading so much, I figured “I can do this, too”. Why can’t I write a book? I’ve got stories to tell.

I prefer non-fiction work, but I started writing fiction. It gave me an escape in prison and it taught me how to write.

The first thing I ever really wrote was a book about slavery, the antebellum south. I woke up out of a dream and I started writing down what I saw. I grew up in a home, on the street, where everyone called everyone else by ethnic slurs. But in my house, my mother would never allow that sort of talk. If you were singing along to a rap song and said the ‘n-word’, my mom would hit me over the head.

When I started reading about the horrors of slavery while in prison, combined with my experience in jail, I felt empathy. I was sensitive to people being in chains and I was in chains. Where did this attitude all come from? I wrote a beautiful novel set around a girl growing up in the south during the time of slavery.

What do you enjoy doing when you’re not working?

Reading is one of my favorite pastimes, but you could make the argument that it’s work as well—research and training. I don’t live a really exciting life like I used to. I’m not involved in any sports anymore. Just a lot of reading.

I’m a big fan of mob movies and television shows. There are many people affiliated with that life who are irked by the content in those productions. Some military veterans display a similar disdain for the portrayal of war in movies and the media. What is the biggest–or most irritating–misconception people have about life in and around the mafia?

Movies. People watch television and movies and think what they see is the real mafia. Some of it is accurate, some of it isn’t.

The Godfather was more accurate how the old-timers from the first half of the 20th century were—be quiet, don’t sell drugs, we won’t destroy our neighborhoods. Goodfellas was more like my era; less abiding by the code, more greedy, more wild, more raucous. Tony Soprano would never visit a psychiatrist. If the mob got wind of that, people would conspire against you. You’d never ascend up the mob ladder. What is he telling her? They’d want to get rid of him.

It’s more sanitized in the media, but in real life it was more vicious.

Your book, Mob Rules detailed over 80 lessons on how to conduct yourself in business, with family and friends, and within society at large. Is there any passage in the book that’s your favorite? Anything you wrote then that you disagree with now?

I don’t disagree with anything. I was in Sicily and I re-read Mob Rules. I’m working on a project right now that required me to reread my book. I was looking at it—I was proud of myself.

What can I teach an interested reader? I’d talk about principles more than specific tactics; don’t suffer from hubris. Be a pizza egg roll (want to know the reference?—read my book). Don’t get over on people; don’t be Machiavellian. Follow the path of virtue. Follow a code of honor. Keep the moral high ground, even if it’s a short-term loss.

Have you ever tried to talk any of your old friends and associates out of that way of life? Do you distance yourself from past social circles entirely?

In prison, I would talk to people because I had their ear. They are more willing to listen since they are suffering for what they did. That’s what I would do. Tell them that what we’re doing is nonsense. I don’t deal with old associates on the street, so I don’t really do it. If I do bump into them, I don’t tell them to leave that way of life—it’s tough, they are making money from it, so it’s hard to tell them to leave their way of life.

I miss the camaraderie; I won’t experience that again. You make your best friends during times of adversity; we were suffering together and we needed each other to survive. We made the best of it, but it’s hard to isolate those positive experiences without accepting the negatives of being in prison.

I met two people who I held dear: One of them passed away, he was a corporate attorney. Another guy was from the streets of Connecticut, a young guy. They gave him 35 years for selling drugs; I was disgusted. He’s already in for half that time, and he’s a changed man. He was a nice guy, helping everyone that he could. I still write him and contact him. I love him like a little brother.

As a former mafia associate and heist man, you’ve got the unique experience of someone whose found success on both sides of the law. Do you have any advice for people looking to rebound from a checkered past? Words of wisdom for the population at large?

First thing you have to do is eliminate the possibility of going back to crime. Burn that bridge; don’t look back. No matter how bad things are, do whatever you have to do—beg, live on the street— to ensure that you abide by the law. You have to learn to work harder and be patient to get things—you can’t steal and have everything you want right now. Delayed gratification. Put your time into learning a skill and using foresight to find the right opportunities. The criminal mind doesn’t have that patience and foresight.

It’s not impossible to reinvent yourself. Never quit. Trust in themselves and in a higher power to help them prevail.

You’ve already penned a few books, a number of articles, and make the rounds as a lecturer and keynote speaker. What’s next? Any projects in the pipeline?

I finished another book about the dreaming mind, the physiology of dreaming and the significance of the dreams that we have while were asleep. I recorded all my dreams when I was in prison and I’m finding. I like television production. Besides filming a pilot for a show that I hope goes into production, I have some other ideas.

I was also the co-creator of a show called The Diamond Collar, about a couple in Brooklyn that rescues dogs and cats. It ran on the OWN Network.

Where can readers find more of your work (website/contact info)?

Silence: Are You Getting Enough of It?
iPads and Jordans: The Economics of Hot-Ticket Items
More Mating Calls of the Irrational Sports Fan (Part 1)

I Did An Interview For A Website For Authors