Thanksgiving dinner is approaching and Ashton Kutcher’s brought enough self-righteousness for everyone:

“Following the news earlier this week that employees at a Walmart in Canton, Ohio had set up a food drive in their store for coworkers who couldn’t afford a happy Thanksgiving, “Two and a Half Men” star Ashton Kutcher took to Twitter to scold the company for what he viewed as its less-than-fair employment practices.”

The oft-maligned retail giant can pay its workers what it wants and employees have the freedom to stay or seek other opportunities.

If the population at large really cared about Walmart’s employment policies, they wouldn’t be jostling for a spot in line every Black Friday (a day after giving thanks for their health, family, and good fortune, no less).

The ‘Walmart-is-evil-because-of-low-wages’ clique has been peddling this nonsense for years. Vocal minorities are often people far removed from a situation-more interested in stirring the pot than thoughtful dialogue— or those with an axe to grind.

They’re a lot like the folks who said they’d never watch another NFL game after the 2011 lockout. They held little to no interest in sports to begin with, firmly on the fringes of fandom.

Ashton is free to employ these people on the set of his shows and movies at a wage he feels is ‘fair’. Ironically, Kutcher’s at the very top of an industry that pays among the lowest average wages to its employees in all of western civilization

(Think about all the actors who wait tables at night while running to auditions and acting classes. That counts as work-related activity—they just don’t get paid for it.)

Huh? What’s that? They’re not qualified to work on a production set?

Why would skill set and labor demand matter to him? It’s all about caring and ensuring people have enough money to spend on the essentials.

When he’s done pointing the finger at Walmart, perhaps he can throw a few bucks towards the millions of struggling actors out there. They work hard at providing entertainment for all and ‘deserve’ a good living, too.

Or maybe he can shame the movie and television studios who pay extras next to nothing into upping wages across the board.

What’s also lost in the shuffle is the condescension embedded within the disapproval of the food drive.

The rich don’t have a monopoly on philanthropy.

Autonomy and magnanimity are two of the biggest motivators behind much of what we do.

To say there’s something wrong with participating in a food drive because you’re not of means is insulting and robs a person of one of life’s basic dignities: the ability to help one’s fellow man. 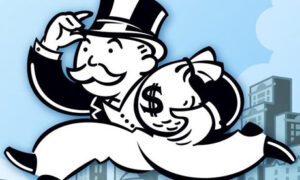 Is this the only guy allowed to give during the holidays?

Furthermore, charity assumes many forms. Teaching in-demand skills and providing employment opportunity are other useful ways to help those in need.

You know, teaching a man to fish.

Big-box stores create a number of problems, but poverty isn’t one of them.

Why Good People Stand By and Do Nothing: Bystander Non-Intervention
Knicks Ousted From Playoffs In Five Games
Keeping Your Digital Life in Sync

Testimonies and Transformations: Man’s Tangle With The Supernatural

In Defense of Wal-Mart