I love games and sports.

The solution-based focus of competitive activity mirrors what’s needed for success in the real world.

When I’m not playing football or battling over park place, I’m holding court in one of my fantasy sports leagues. For someone with my competitive bent, it’s a seamless fit.

Previously dismissed as another iteration of Dungeons & Dragons, fantasy sports are more popular than ever. There’s nothing imaginary about the impact of fantasy sports competition on the American economy.

One of the names making waves on the fantasy football circuit is Jonathan Bales, creator of the Dallas Cowboys-inspired TheDCTimes.com  and the popular 100 Fantasy Football Tips in 100 Days’ series.

I’ve invited Jonathan to tells us more about himself.

Tell us a little about yourself, Jonathan. (Where are you from, your background, anything we might find interesting about you etc.).

I’m originally from a small town outside of Philly. I cover the Cowboys, so most people assume I live in Dallas, but I’m actually currently located in NYC. When I’m not watching or analyzing football, I like reading philosophy/theoretical physics.

When/how did you realize you wanted to work in the sports industry? Was it obvious since childhood?

No. I always loved sports, but I didn’t really consider a job in the industry until college. I started a blog at that time which became semi-popular and led to most of my writing jobs. I’d consider myself a writer/entrepreneur more than someone who works in sports, though.

What separates your fantasy football recommendations from that of other pundits is your background in Math and Statistics and its subsequent application in your work. You provide hard data instead of conjecture masquerading as analysis. Along with a few other disciplines, Statistics is one of the strongest tools available for interpreting the world around us. How were you first introduced to the field of applied mathematics and why did you stick around?

I was in a lot of advanced math courses throughout school. I finished the majority of my college coursework while in high school, and then I majored in Philosophy and Psych Stats in college. I wouldn’t say I “stuck around” as much as math just followed me as a pragmatic tool through which I can better understand the world and make accurate predictions.

What obstacles on your path to sports writing have you encountered? How did you overcome them?

I guess the primary obstacle is trying to make a name for myself without ever signing on with a single site. I have and always will work for myself, so the rise up was a bit slower than if I just started working with a big publication right out of the gate, which I probably could have done.

What is the biggest misconception people have about your job as a fantasy football commentator?

Um, the biggest misconception is probably that, as an expert, I should win all the time. I participate in tons of leagues and I lose a lot. If an average owner in a 10-team league has a 10 percent chance to win, I might be at 20 or 25 percent. So I’ll still lose the majority of the time, and that variance gets misinterpreted for weakness a lot.

When you’re not writing and crunching numbers, what do you enjoy doing?

I read a lot. I try to read non-sports stuff every night. I work hard on the numbers/writing all day, so I really want to get away from it at night. I also like eating out, which my girlfriend and I sadly do literally every day. There are too many great restaurants in NYC to eat at home.

I’m a serious competitor at heart, so I’m loathe to help out any members of my leagues who read this interview, but I’ve gotta ask: What’s one sacred principle of intelligent fantasy football play that’s completely false or seldom supported by predictive statistics (e.g. avoid RBs age 30+, always take a running back early in the draft)?

One is injury proneness, which probably exists but is really difficult to accurately identify and predict. The distribution of injuries is much like what we’d expect if injuries were totally random, so it’s really challenging to know if players are truly injury prone or just unlucky. And by the time we do know, it probably can’t be translated into actionable information.

You’re a regular contributor to a number of publications, including The NY Times, and were tapped to run a blog for The Dallas Cowboys. How did you land those gigs? Are you a full-time writer or do you have another occupation? Any advice for aspiring sports or business writers?

I just e-mailed them, to be honest. When you first start, no one is going to come to you. You have to e-mail editors all the time to show them what you can do, so that was a major part of my plan a couple years ago.

I’m a writer, but I also do some investing to pay the bills.

Your books on fantasy football strategy were so good, I finished them within 48 hours of purchase. I’d like to think I’m a solid competitor in fantasy basketball and football—doesn’t mean I’m not eager to learn more. Any new projects on the horizon? What’s next for you?

I will be taking a few months off in early 2014 to do nothing but write books. I plan to do at least two for next year, but maybe even three. A few other projects coming as well, so stay tuned.

Where can we read more of your work (website/contact info etc.)?

I post a lot of my work at TheDCTimes.com.

You can buy my book and other fantasy football packages at FantasyFootballDrafting.com. 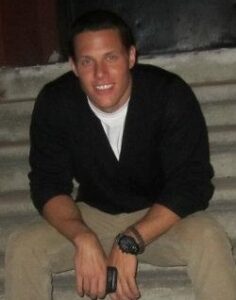 Tools for Negotiation: Log-rolling
Studies On Happiness (and how they can boost your business)
Boundaries Elevate Relationships and Enhance Quality of Life: How To Get Yours in Order

Fantasy Football 2013: What The Stock Market Can Teach Us About Draft Strategy

Legends of the Past vs. The Stars of The Present