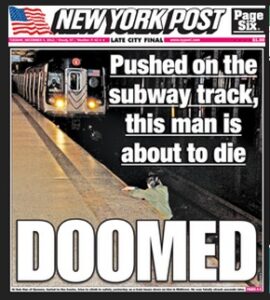 A disturbing story from earlier this month:

The photographer who shot the New York Post’s controversial front-page photo of a man about to be killed by an oncoming subway train defended his actions on Wednesday, saying there was “no way” he could have saved the victim.

“The only thing I could think of at that time was to try and alert the driver [of the train] with my camera flash,” R. Umar Abbasi, a freelance photographer, said in an interview with the “Today” show.

Abbasi was on another assignment for the tabloid on Monday when he saw Ki Suk Han, a 58-year-old from Queens, N.Y., hurled from the 49th Street station platform onto the tracks by a man who seemed to be deranged.

“From the periphery of my eye I saw a body fly onto the tracks,” Abbasi said. “There was a collective gasp, and that caught my total attention.”

The photographer said he fired off his flash 49 times. “If you look carefully into the eyes of the conductor you see two lights,” Abbasi continued. “I think those are my flash lights that are being reflected.”

Insensitive image and headline aside, there’s a lot to learn from this story.[[MORE]] The photographer, who failed to physically aid Han, was roasted by the nation at large.

Was he worried more about a good photo-op than the victim’s well-being? And what of the other on-lookers on the subway platform? What kind of person can watch a tragedy unfold before their eyes without taking action? What is one to make of this ordeal?

Considered the most cold-hearted, unfriendly city in America, New York is known as much for its austerity as its entertainment and tourist attractions. NYC’s reputation isn’t entirely undeserved; skyscrapers, cement-gray sightline, and aggressive cab drivers have a way of intimidating even the most congenial traveler.

(Full disclosure: I’m from Long Island, NY.  I don’t consider myself a hostile guy, but that’s for you to judge.)

People in big cities keep to themselves to avoid stimulus overload. With all the noises, sights, and frenetic activity in everyday city life, it’s easy to be overwhelmed. Because we so often underestimate the impact of environment on the disposition of others, we label people without fully considering the causes of their behavior. 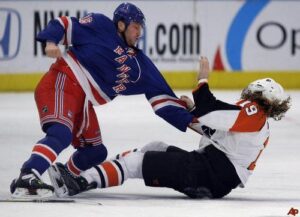 Not the norm in New York City.

When you engage a random person in conversation, you’d be surprised how friendly they are (most of the time). Individual acknowledgement in an impersonal world is disarming.

The NYC subway incident could have happened in any densely-populated city.

The more people available to respond to an event, the less likely any individual will take action.

The desire to be accepted by our peers is one of the biggest determinants of human behavior.

We are unsure if the person in question actually needs our help and whether we are fit to provide assistance. Unwilling to appear foolish in the eyes of others, we take our cues from the people around us. Individual responsibility dissipates as the crowd grows; the emergency becomes ‘everybody’s’ problem. Nobody makes a move so we stay put, further reinforcing inaction within the crowd.

Predictably, no one does anything—often resulting in tragedy.

History is rife with examples of citizen inaction. Given the risks of acting during unusual events, there’s actually an evolutionary benefit to delayed response.

Who knows what many of the people lambasting the subway riders might have done in a similar situation?

It’s easy to be noble when you’re sitting behind a computer screen. 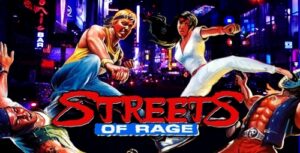 One of the more notable instances of Bystander Non-intervention occurred in New York City nearly fifty years ago.

In 1964, Kitty Genovese was murdered outside her home in Queens, NY. There were dozens of people who claimed they heard Kitty’s cries for help, but no one confronted her assailant. A few people claimed that they attempted to ward off her killer; whether anyone actually witnessed the murder is still up for debate.

When news of the Genovese murder hit the papers, the nation decried the lack of response from the Queens neighborhood, much like the criticism received by the Daily News reporter.

The more people available to respond to an event, the less likely any individual will take action.

We’d all do better to consider what the other guy is thinking before rushing to judgment. When you understand the reasons why we do what we do, the applications are endless.

It’s been another great year at Just Tap The Glass. See you in 2013.

Studies On Happiness (and how they can boost your business)

Deciphering Labels in the Food and Beverage Industry