A name change is one of the most effective ways of distancing one’s company from a checkered past. The infrastructure remains the same, but you can mold your new public persona to your liking. 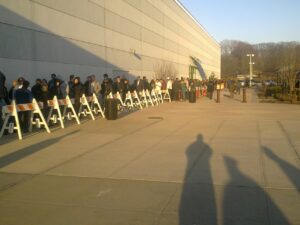 Get it over with

Airtran Airways: Formerly known as “Valujet”, re-emerged as “Airtran” after deadly plane crash made headlines in May 1996.

MCI: Changed it’s name from “Worldcom” to “MCI” after allegations of misappropriation and financial scandal in the early 2000’s. Today, it’s a subsidiary of Verizon.

Amway: The Multi-level Marketing company transformed into “Quixtar” in the 1990’s and reverted back to “Amway” in 2007. Lawsuits and government sanctions rained down on Amway after less-than-ideal interactions with members and partner companies. Immortalized in a Chris Hansen Dateline NBC exposé.

Altria: Formerly “The Philip Morris Companies Inc.”. Peddling tobacco and other carcinogens will never lend itself to good public relations.

Logo and trademark redesigns also work well (assuming customer relations have been positive). Many of the big fast food restaurants have updated their interior and exterior decor to keep pace with changing consumer tastes and social mores:

Eradicating an organizational facade is the proverbial “one step back, two steps forward” strategy. It’s not popular in any industry and invites heavy criticism. It can cost people their jobs as well.

Sure, you can administer quick-fixes and superficial changes to keep your organization afloat, but you might be relegated to a constant state of mediocrity, a netherworld where you never run with the stars of your industry and forever limit your growth potential. Stripping the cupboard bare and starting anew offers a chance to remedy costly blunders of the past.

Unless you can walk on water, this ain’t gonna work.

The following example occurred a few weeks ago. Unfortunately, it does not bode well for the affected organization’s future.

Sometimes, it’s better to start over instead of erecting a new building on an old, shaky foundation. There are times when we need to take two steps backwards to push onward to new heights.

The Orlando Magic would have been better off letting Howard walk in the off-season than trying to rebuild with a team of one-dimensional veterans and cast-offs.

Of the four teams involved in the trade, The Magic got the worst of the deal. Missing out on both elite big-men and acquiring no high-upside wing players, they picked up a few mediocre players in the typical “three quarters for a dollar” deal. Since the other teams in the deal are playoff contenders, all three first-round picks will almost certainly be outside the top-15—all but eliminating the chances that Orlando picks up a potential franchise player in the next two drafts.

The Philadelphia 76ers—who dealt one of the best individual defenders in the league, Andre Iguodala—-landed a far better haul, acquiring Andrew Bynum and establishing themselves as a contender in the East.

Reports said Andrew Bynum was not willing to sign an extension with the Magic, so Orlando’s reluctance to trade for him is understood. Orlando is not a premier free agent destination either, so it may be difficult to attract a marquee name in the next few years. The Nets offered their center, Brook Lopez, as the centerpiece for a deal but Orlando declined. Given Brook’s troubling rebounding problem, I can understand why.

Nonetheless, this deal does little to put Orlando on the road to title contention. If they couldn’t get Bynum to sign an extenstion or land another franchise player, they were better off letting Howard walk away.

It would’ve been painful, but life requires a litany of tough decisions.

All the more reason small market teams need to strike gold in the NBA Draft. And a trade like this, that puts a team squarely on the mediocrity treadmill, is a veritable death blow to both fan enthusiasm and ticket sales for the owner (who, coincidentally, co-founded Amway).

By forgoing a “cellar-dweller” period and staying competitive in the 2012-2013 season with the players acquired in the trade, Orlando managed to diminish the value of its own pick in next year’s draft as well.

Not a good start for the future.

Chris, Your Response is Appreciated
How to Overcome Shyness and Social Anxiety
Want To Get Faster? Speed Ladders are Overrated.

Sports Analytics and Talent Development in The 21st Century