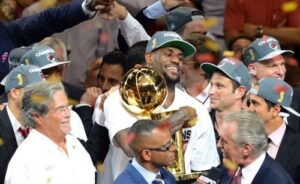 The Miami Heat came close last year, but couldn’t overcome a Mavericks team that was ideally-suited to attack their weaknesses.

Now, Lebron James—and to a much lesser extent, Chris Bosh—can finally hurl that monkey off his back.

The criticisms lobbed at Lebron have been far from rational, but he can exhale for the rest of the summer.

Dwayne Wade will get much of the praise as the “Batman” to Lebron’s “Robin”, but that depiction is extremely inaccurate. Dwayne Wade may be the nominal ‘most important player’ to the franchise, but this team goes only as far as Lebron takes them.

Lebron may never get the credit he deserves for reasons that transcend the game of basketball.

Most fans cannot appreciate just how difficult it was for Lebron to carry the hapless Cleveland Cavaliers to the NBA finals a few years earlier and operate as the engine behind the success of the 2011-2012 Heat , a run that saw him handling much of the point guard duties while defending power forwards and centers.

A most accurate representation of Lebron’s career—even in Miami.

Even with relaxed rules on hand-checking, the game of basketball will always revolve around who can best score and defend in the paint. It’s extremely difficult, if not impossible, for even an all-world perimeter player to win an NBA title without a dominant interior scorer and defender.

The Los Angeles Lakers, one of the most storied franchises in NBA, offer a great example of this principle in action.

Kobe Bryant, a sure-fire hall of famer and one of the best NBA players of all-time, has won a total of zero titles without elite big-man talent. He won three championships in the early 2000’s paired with Shaquille O’Neal, arguably the most dominant center of all-time. Flanked by Pau Gasol, an emerging Andrew Bynum, and the ever-versatile Lamar Odom, he added two more titles to his mantle in 2009 and 2010.

The middle of that decade saw Kobe paired with the likes of Samaki Walker, Kwame Brown, and Chris Mihm in the post. Despite boasting the top perimeter player in the world, the Lakers sputtered to several early playoff exits. Although Kobe was finally “the man” on his team, he grew increasingly frustrated by the lack of support from his teammates, culminating in that infamous Game 7 Performance in the 2006 Playoffs against the Phoenix Suns.

During these years, Kobe wasn’t the beloved player he is today. In the midst of all the anti-Lebron hysteria, many forget that Kobe was vilified for breaking up the Lakers Dynasty of the 2000’s. Much of that negative sentiment was swept under the rug when Kobe finally won a ring without Shaq in 2009.

A (very) thin line between love and hate.

In sports—and much of  life, really—- winning makes all the difference.

Die-hard Derrick Rose supporters are in for a bumpy ride. Michael Jordan isn’t walking through that door (and even he had lots of supporting talent).

Lebron, a 6’9’’ 270lb monster with the strength of a center and the quickness of a guard, is the exception that proves the rule. He’s been the driving force behind three NBA finals teams without a dominant center.

Congratulations to Lebron James and the rest of the Miami Heat for taking home the NBA title. As long as Lebron, Dwayne Wade, and Chris Bosh stay healthy, they will be a title contender for the immediate future.

How To Build Your Own Online Library for Books, Music, and Videos
Thanksgiving and The War Against Animal Trafficking
What We Learned From Mike Brown, Eric Garner, and Ferguson (Part 1)

Unsung Heroes of The NBA Finals