I was discussing the NBA with my cousin when the topic of the Charlotte Bobcats came up. Michael Jordan (current majority owner, former personnel exec)’s role in the mess took center stage.

The Bobcats (the worst team in the league in 2011-2012) have missed the playoffs five out of six times since Jordan joined the team and finished with the worst record this season. 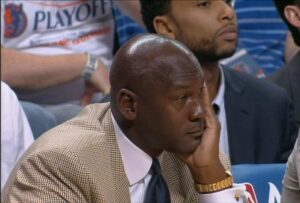 As close to the playoffs as Jordan and the ‘cats will get in the next few years.

As both the face of the franchise and the man calling the shots, Jordan has to take the blame for it.

He’s arguably the best to ever play the game, but the team’s failings shouldn’t come as a surprise.

It’s another example of the Halo Effect.

Halo Effect: Greatness in one area of life influences our perceptions of an individual in others. We tend to overestimate situational competence.

There’s a direct positive correlation between attractiveness and success in the corporate world.

Attractive people are afforded a significant advantage over their peers in nearly every walk of life.

It’s not strictly a causal relationship (correlation does not equal causation); it’s a function of opportunity to display talent and ability.

People want to align themselves with those who display traits that are highly-valued.

Desirable traits, such as physical attractiveness, are held in high regard; we are more willing to do things/provide opportunity for people we like and respect.

It’s the Principle of Association— one of several principles of influence that explain much of how we think and make decisions.

The more chances you’re given to excel, the higher the likelihood that you’ll do just that. Success begets healthy self-esteem, confidence, and assertiveness—traits that facilitate further excellence.

Industries in the public eye (e.g. acting, politics) will always be dominated by “beautiful people”—regardless of individual merit.

The power of the Halo Effect poses an intriguing question for parents as well.

Former star athletes have broadcasting and sports analysis jobs waiting for them when they retire. Retired senators and government executives land prestigious jobs as lobbyists and corporate big-wigs when their terms are up in Washington D.C.

It’s assumed that these folks will perform well in their new jobs—or at least provide some publicity for their new companies.

Unfortunately, that’s not always the case.

Greatness in one field doesn’t always translate to superior performance in another. The skills and abilities essential for success in one arena may carry little weight in another.

The transition from great athlete to front office executive is a not an easy one. Ironically, all-time great performers often have the most difficulty.

Kareem Abdul-Jabbar, the NBA’s All-Time Leading Scorer, was an ineffective coach. He was aloof and had trouble relating to the rank-and-file players that populate every NBA roster.

Jordan—a renowned workaholic whose desire to prepare to win may be unparalleled—refused to be outworked as a player.

The same hubris that made him an unstoppable force on the hardwood may hinder his performance in the front office. Star performers often overestimate their ability to succeed in other subject areas; it can lead to disastrous results.

Otherworldly performance as an NBA player does not confer an eye for player chemistry, talent, and shrewd cap decisions. Poor drafting, questionable free agent signings, and no cohesive plan of action have relegated the Bobcats to the league basement.

The rumored presence of “yes-men” may also be to blame.

Jordan hired former Blazers General Manager Richard Cho in 2011, a step in the right direction. They drafted a few good pieces in 2011 (Bismack Biyombo, Kemba Walker) and the new CBA levels the financial playing field for small-market teams, so there is hope for the future.

“What Do I Do With My Life?”: 4 Steps to Hearing God's Will for Your Career, Relationships, and Futu...
NBA Brass Taking Their Trophy to South Beach
McDonald’s vs. The Labor Movement