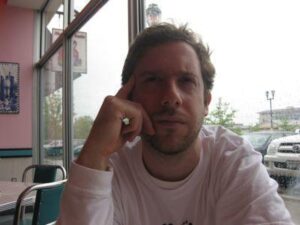 When I want to know the latest offerings at a restaurant or drive-thru, GrubGrade is one of my first stops. High-quality food photos paired with detailed reviews satisfy even the most discerning readers.

I’ve invited Ryan here to tell us more about himself.

Tell us a little about yourself, Ryan. (Where are you from, your background, anything we might find interesting about you etc.).

Uh oh, a little about myself?

Well, I’ll just say that talking about myself is pretty uncomfortable, but I’ll give you the basics.

I’m originally from the DC Metro area and I’m still happily here.  I have a full-time job that has absolutely nothing to do with GrubGrade.com (which is just a little side project to keep me busy).  I consider myself a dummy with an opinion and a camera.  If you check out my stuff, you’ll know I have no real writing skills or photography skills.  Sure I can be self-deprecating, but I don’t take myself too seriously.  Something that you might find interesting about me is that out of all the people I know, there are probably less than 10 people in my world who actually know about GrubGrade.  I’m not yet satisfied enough to show it off.  Maybe year 4 will be different?

What’s the story behind GrubGrade.com? How did it all get started?

I came across a fast-food-centric blog one day back in August 2008 and found it interesting that someone was writing full reviews on fast food I was craving at that very moment. I guess that was the first time I experienced something like that and it’s funny how a few years later, I’m completely immersed in it. I contacted the guy who ran the site and asked him if I could contribute. I was welcomed with open arms and began writing fast food reviews and pretty much taking pictures every day of anything I was eating.

About 5 months later, the blog was abandoned by its owner and I had trouble reaching him.  After a few weeks of trying to reach him, I gave up and thought to myself, “This doesn’t seem too complicated.  I’ll start my own blog.”  GrubGrade was born a couple days later.  I started the site on February 18th, 2009 and it’s been updated at least once per day ever since and I have no plans to change that. Although GrubGrade is just a hobby of mine, I’ve spent countless hours building it up. My plan is to have the next 12 months be the most important in taking GrubGrade to the next level… lots of good stuff coming.

What were the best and worst experiences you’ve had while dining out?

My best experiences eating out would have to revolve around a culinary trip I took to Cleveland, Ohio.  I was hosted by this tourism-board of sorts.  This three day excursion had me visiting everything from hole-in-the-wall joints serving up pastrami sandwiches the size of my head to shops pairing beer with chocolates.  I loved every minute of it and probably gained a few delicious pounds.  I also have to add the first time I experienced Ike’s Place in San Francisco.  I had to order my meatball sub 5 hours in advance and it was totally worth it. The #85 Super Mario at Ike’s Place… Best. Sandwich. Ever.

My worst experiences dining out would include any time I’ve been caught taking pictures of my food.  It’s always incredibly awkward having to explain myself. Throughout the years, I think I’ve perfected the delicate art of ninja photography.  Also anything that has given me a bad stomach ache would constitute some of my worst experiences.

I’m not a big fan of most fast food; I am partial to Five Guys Burgers, though. You’ve said that Pizza and Mexican food are your favorite dining fare. Do you have a favorite restaurant?

I’m in love with Mexican food.

The best Mexican grub I’ve ever had was in San Diego at this little place called Las Cuatro Milpas. I doubt I’ve ever gone a week without having at least a slice of pizza, but I can’t really think of a place that has really stood out as my absolute favorite.  When it comes to fast food joints, the answer is easy. In-N-Out Burger is a must whenever I’m on the west coast and Chick-fil-A is regular favorite of mine.

In just three short years, GrubGrade has become a go-to site for reviews and updates on casual dining fare. I’m sure your dedicated staff has played a role in the site’s success. How did they come into the fold?

There have probably been 10+ writers in the 3 years the site has been up and I’ve held all of them to the same guideline, “Write what you want, have fun with it”.  The last thing I want to do is feel like a boss so I try to hold everyone to absolutely no pressure.  The only pressure that needs to be felt is on my own shoulders.  I have specific standards and goals I’ve set for myself and if every contributor decided to move on to something else, I’m fully prepared to continue the project solo.

Throughout my time with GrubGrade, writers have come and gone. I feel that if you’ve been a part of GrubGrade, you’ll always be a part of GrubGrade and if you feel like taking a year off from it and returning whenever you get the itch, I’m all for it.  Every contribution I’ve received throughout the last 3 years has been greatly appreciated and having multiple perspectives and styles is great for a site that deals with opinions.  If anyone has any interest at any time in regards to contributing to GrubGrade, all it takes is an email to me and we can take it from there.  I started this journey with an email and if you want to come along for the ride, hit me up.

You work as a Quality Assurance Analyst during the day. Have you ever considered a career as a restauranteur, chef, or food critic?

I’ve considered opening up a hot dog shop in my hometown for the past decade because it’s something you don’t really see much of within 200 miles of where I live.

As for chef…..I’m 31 and just learned how to make an omelet so I think I’ll leave the chef stuff up to the pros. Food critic eh?  Aren’t we all though?  Media has changed so much in the last decade and blogs have taken over. Attention spans will continue to diminish.  My food criticisms are likely safe within the comfy confines of GrubGrade.

Do you have any unique or unusual talents or interests?

I’m talented at waking up at around 4am every morning.  I have an absurd collection of elephant figures for some odd reason. I fold my socks.

Most people can point to certain ‘moments of clarity’ that had a significant impact on their lives moving forward. Any life lessons or advice you wish to impart?

The only advice I can give is be incredibly patient and be lucky enough to have good parents.

Where can we find more of your work? (website etc.)

GrubGrade.com is where all the work resides, but you can follow GrubGrade on Twitter (@GrubGrade) or be friends on Facebook (Facebook.com/grubgrade)… or look us up on Google+

Teller Reveals Secrets Behind Magic Tricks
Getting Yours: A (Very Short) Guide to Getting What You Want Without Poisoning The Well
The Number One Reason You Fail to Accomplish Your Goals

Deciphering Labels in the Food and Beverage Industry