The following is an excerpt from a future project–a step-by-step guide to creating fulfilling relationships–that I’ll release in the coming months. Easter is right around the corner and this piece fits right in with our love of Easter eggs, rabbits, and other tokens of the season.

Whether you’re a believer or someone who just appreciates wisdom, this will bear fruit.

Many of society’s most treasured seasonal icons are derived from biblical events. Christmas, a celebration of Christ’s birth, began the tradition of gift-giving that has since been co-opted by commercial interests.

Easter—another seminal event in history—is another.

There’s fun to be had in Easter egg hunts and afternoons with rabbits—even moreso when you appreciate the real reason for the season. 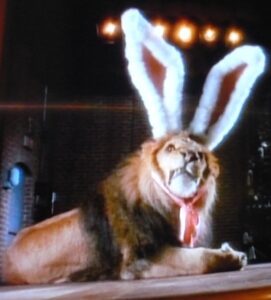 Do the world a favor: do not buy rabbits as Easter gifts.

A pet represents years of commitment and responsibility, a decision not suited for the superficiality of a holiday celebration.

It’s not fair to the animals. We’ve already got enough careless pet owners to go around.

In that spirit, I’m going to share one of Christ’s most profound teachings, a tale that can be appreciated by anyone who values wisdom in business or life.

Easter marked the resurrection of Jesus Christ and the culmination of a divine plan to give man a gift he could not obtain for himself: a chance at life after death.

If you’re not familiar with the story of Jesus’ life on Earth, you can find it in any of the first four books of The New Testament: Matthew, Mark, Luke, or John.

Men of the time didn’t understand that Jesus’ kingdom was not of this world, a spiritual kingdom in nature, not a physical one to overthrow Caesar and Roman reign over Israel. In an effort to clear up confusion about the nature of his kingdom, Jesus used parables, short stories that illustrate the cause-and-effect occurrences that shape our existence,

A good story or anecdote is much more effective for conveying an idea than bombarding someone with facts. Like all great communicators, Jesus understood this intimately.

Many have a misconception about who God is. They see him as some being that set forth rules to restrict our enjoyment for some unknown purpose.

If they believe he exists at all.

The Parable of the Sower explains why so many people are defeated by the hardships of this world instead of grabbing hold of lifelines there for the taking:

“That same day Jesus went out of the house and sat by the lake. Such large crowds gathered around him that he got into a boat and sat in it, while all the people stood on the shore.

Then he told them many things in parables, saying:

‘A farmer went out to sow his seed. As he was scattering the seed, some fell along the path, and the birds came and ate it up.

Some fell on rocky places, where it did not have much soil. It sprang up quickly, because the soil was shallow. But when the sun came up, the plants were scorched, and they withered because they had no root.

Other seed fell among thorns, which grew up and choked the plants.

Still other seed fell on good soil, where it produced a crop—a hundred, sixty or thirty times what was sown.

Whoever has ears, let them hear.’

The disciples came to him and asked, ‘Why do you speak to the people in parables?’

He replied, ‘Because the knowledge of the secrets of the kingdom of heaven has been given to you, but not to them. Whoever has will be given more, and they will have an abundance. Whoever does not have, even what they have will be taken from them.

This is why I speak to them in parables:’”

“Listen then to what the parable of the sower means:

When anyone hears the message about the kingdom and does not understand it, the evil one comes and snatches away what was sown in their heart. This is the seed sown along the path.

The seed falling on rocky ground refers to someone who hears the word and at once receives it with joy. But since they have no root, they last only a short time. When trouble or persecution comes because of the word, they quickly fall away.

The seed falling among the thorns refers to someone who hears the word, but the worries of this life and the deceitfulness of wealth choke the word, making it unfruitful.

But the seed falling on good soil refers to someone who hears the word and understands it. This is the one who produces a crop, yielding a hundred, sixty or thirty times what was sown.”

A second parable, emphasizing that it is never too late to turn your life around, The Parable of the Vineyard:

“For the kingdom of heaven is like unto a man that is an householder, which went out early in the morning to hire labourers into his vineyard.

And when he had agreed with the labourers for a penny a day, he sent them into his vineyard.

And he went out about the third hour, and saw others standing idle in the marketplace,

And said unto them; Go ye also into the vineyard, and whatsoever is right I will give you. And they went their way.

Again he went out about the sixth and ninth hour, and did likewise.

And about the eleventh hour he went out, and found others standing idle, and saith unto them, Why stand ye here all the day idle?

They say unto him, Because no man hath hired us. He saith unto them, Go ye also into the vineyard; and whatsoever is right, that shall ye receive.

So when even was come, the lord of the vineyard saith unto his steward, Call the labourers, and give them their hire, beginning from the last unto the first.

And when they came that were hired about the eleventh hour, they received every man a penny.

But when the first came, they supposed that they should have received more; and they likewise received every man a penny.

And when they had received it, they murmured against the goodman of the house,

Saying, These last have wrought but one hour, and thou hast made them equal unto us, which have borne the burden and heat of the day.

But he answered one of them, and said, Friend, I do thee no wrong: didst not thou agree with me for a penny?

Take that thine is, and go thy way: I will give unto this last, even as unto thee.

Is it not lawful for me to do what I will with mine own? Is thine eye evil, because I am good?

So the last shall be first, and the first last: for many be called, but few chosen.”

Whether you know him for a day or a decade, all that matters is that you join the team. It’s never too late and there’s always room on the bandwagon.

Every day apart from God’s plan is one less day to experience true glory.

God established certain laws and principles to help us draw the most out of life on Earth. Many of the restrictions promulgated by today’s churches and synagogues are man-made, products of ulterior motives; they are devoid of the foresight evident in God’s word.

All the more reason to develop a strong understanding of the lessons shared in the bible, so you’re not misled by fallacy masquerading as gospel.

(Study bibles that offer commentary on scripture are invaluable for this. A plain English description of biblical phrasing goes a long way.)

Slacktivism: The Problem With Social Media Movements
Redshirting: Not Just for College Quarterbacks
Get in Shape Without Leaving the House - No Gym Required

Grace: Why You Need More of It

“What Do I Do With My Life?”: 4 Steps to Hearing God’s Will for Your Career, Relationships, and Future

When Sacrificing Isn’t: The Hidden Benefits of Service