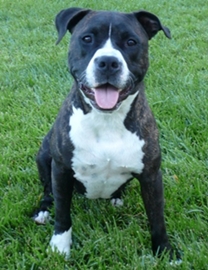 I was watching a re-run of the final episode of Pit Boss, an underrated reality series on Animal Planet about a dwarf who rescues Pit Bulls. Shorty Rossi and crew were in Miami to help overturn a ban on pit bulls in Dade County.

It got me thinking about the reasons why the reputation of the Pit Bull remains sullied.

Before I started writing about people, animals were my focus. I majored in Animal Science in college, before I changed to Applied Economics and Management (AEM). I spent years on the Pre-Veterinary path, including research apprenticeships and jobs at vet clinics.

I still love animals of all persuasions and this is a good opportunity to write about them.

Public fear of the Pit Bull is justified. They are frequently at the center of “Dog-Bites-Man” incidents, mauling pets and terrorizing neighborhoods. Bred for the purpose of combat, their facial structure and unrivaled determination to maintain a bite elevates their capacity to inflict damage.

Alas, they are no more prone to anti-social behavior than any other breed.

If we want to find the real reason why the “Pit-Bull-as-Menace” motif persists, we need to look beyond the dog’s muscled physique and imposing jaws. Look past the hysteria surrounding the Pit Bull’s history in America and we discover an intriguing “Correlation vs. Causation” argument.

Is it possible that the real villain is lurking just outside of the spotlight? 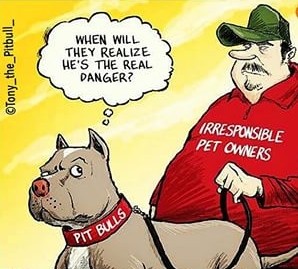 Behind every dangerous dog is an irresponsible owner.

Want to know why so many towns outlaw Pit Bulls?

A tiny fraction of “bad” dog behavior can be attributed to chemical imbalances and faulty wiring.

Virtually every instance of a dog misbehaving is the result of humans ill-equipped to handle the animal. Could be ignorance, negligence, or deliberate departure from training “best practices”; the impact is the same.

There really is no such thing as a “bad” dog, just dogs that are anxious, timid, undisciplined etc. because of improper handling. Most dogs can be rehabilitated by behaviorists who understand dog psychology.

Pit Bulls are highly-trainable, more intelligent and eager to please than many other breeds. They are fiercely loyal to their packs. Taken alone, these traits are something you’d want in a pet.

Add the human element to the equation, however, and we see how the problem starts.

Pit Bulls are ideally-suited to dog fighting not just because of their physical features, but because they take to the training more readily than many other dogs. They are eager to please their handlers and see other dogs as threats to their pack structure. In the hands of someone who cares little for the welfare of others or ethical treatment of animals, the Pit Bull can be molded into a monster.

There’s a reason why the breed is inextricably-linked to dog fighting in America.

Even well-intended owners, who may not understand proper socialization and training protocol, can unwittingly raise four-legged menaces to society.

Dogs take their cues from their masters. Even gentle breeds, like Golden Retrievers, can be nasty if poor normative cues are instilled from puppyhood.

Irresponsible Pit Bull owners are the real threats to our neighborhoods, much more than the dogs themselves.

Think about the types of people who gravitate to Pit Bulls. There is a certain “tough guy” element within the “Pit Bull Owner” community.

Not everyone who gets a Pit Bull or Pit Bull mix falls under this umbrella, since a sizable percentage of the animals available for adoption are pit mixes.

You can only adopt what’s available in shelters.

I’m talking about folks who want Pit Bulls for ulterior motives, those who see the animals not just as a pet, but as a proxy for what they’d like to be.

The dogs are featured players in certain genres of movies and music (see: rap videos). It’s not Beagles or Poodles—ironically, one of the most aggressive breed of dogs, belying its frilly appearance—idolized by this element, but “in-your-face” breeds like the Pit Bull or Rottweiler. Pit Bulls are a physical embodiment of many of the virtues—power, fearlessness, dominance—in high-demand in those industries.

Politically-incorrect? Sure. But you should expect nothing less from this site.

There’s a certain element of immaturity there as well, people more focused on impressing their peers and following trends than pursuing more substantive interests. Like driving a sports car or rocking certain brands of clothing, people think what they own is a representation of who they are.

Owning a Pit Bull is just an extension of that.

It’s an easy way for someone to project an image of toughness or masculinity, a means to feel powerful in a world that can make people feel anything but. 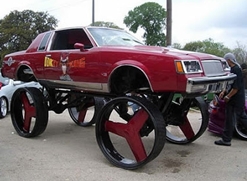 Pit Bulls: Not unlike car modification and guns.

Immaturity and irresponsibility go hand-in-hand, so it’s no surprise that many Pit Bull owners bring problems to their neighborhoods.

They’re often the same folks who think it’s “mean” to neuter their animals, even though it reduces aggression and enhances quality of life.

– “Walks” are something you do once in a blue moon.

– You think neighbors should tolerate Rex’s incessant barking (“If they don’t like it, they can move.”)

– You think dogs double as fashion accessories or evidence of masculinity.

Now that we’ve examined the Pit Bull problem, let’s discuss how you can raise a friendly, well-socialized dog (be it Pit Bull or Boston Terrier):

Letting it roam your backyard does not count. Walks through the neighborhood provide not only physical exercise, but mental stimulation as well. The sights and sounds of the environment—and contact with other animals—expose your dog to stimuli that advance its ability to cope with life outside of your home. It learns the right way to interact with others.

To your dog, a yard is just a bigger cage. After the first few exposures, the dog becomes intimately familiar with the area and loses interest. Unless you live on a three-acre farm, your dog will be bored in short order. It can only run from one corner to another so many times.

Don’t be lazy. Don’t be selfish.

Walk your dog daily. If you can’t—or won’t—do it, pay someone else to do it.

It is that important.

Dogs that do not get walked regularly develop behavioral problems, like a fear of strangers, wanderlust, and territorial aggression. Part of that is pent-up energy from a lack of activity, some a manifestation of the “me-against-the-world” mentality that develops in pseudo-solitary confinement.

Some owners chain their animals in the yard, or leave them in dog runs for extended periods of time. They think they are doing their dog a favor, letting him get fresh air instead of being confined to the house. This only exacerbates these problems, as the dog becomes fiercely protective of the little space it does control, snarling at anything that comes near its mini-fiefdom.

There is no substitute for walks.

I’m hammering home the importance of walks because they root out many of the causes of “bad” behavior. Walks help you bond with your dog and force you to pay attention to the animal. You can’t help but make better decisions as a pet owner if your dog is more than an afterthought in your daily existence.

The odds that you’re an irresponsible pet owner are inversely proportional to the time spent thinking about your pet’s well-being. The very nature of putting some shoes on and taking your pet for a walk demands a certain commitment that’ll guide your thought process on caring for a dog in the right direction.

People walk their dog once a month and then wonder why the dog goes crazy every time you take it outside for a stroll.

And forget about going to a big park and taking him off-leash; you will be chasing Rex for hours. How would you behave if you only got an hour of freedom every month?

It’s like recess in elementary school: you cannot wait for it to get here and you never want it to end.

If you’ve got a big dog, you’ll tire of having it drag you like a rag doll whenever you step outside the house. If anything, daily walks will encourage you to teach it some basic commands and obedience.

Dogs were not meant to be caged.

And if you are leaving your dog unattended in your yard, make sure you keep up-to-date photos of your pet; you will need them for those “Missing Dog” posters.

Note that this article is not a call to adopt more Pits or shoot them up your list of “Most Adoptable Breeds”.

The laws and reputation of the breed will cause a lot of hassle for you if decide to get one. People will still cross the street if they see you walking one, no matter how lovable your dog is. You’ll also have a tough time bringing them into many townships across America.

Pit bulls make great pets for houses with young kids; they are big enough to withstand roughhousing–unlike many smaller breeds–and are highly-trainable. Just know that ownership of a Pit will beget headaches you would avoid with other breeds.

That won’t change, whether you own a Pit Bull or a “Staffordshire Terrier”.

Hitting the reset button on the breed’s history in the U.S. would be nice, but the world doesn’t work that way; Perception is reality. This Pit Bull discussion is just another example of the value of “taking a closer look”, examining what we think we know to make better decisions in the future.

How The Other 98% Lives: Life as an Undrafted NFL Free Agent
My Bracket for the NCAA Tournament 2013: An Exercise in Contrarianism
Apple iPad 2 Unveiled March 11, Many Disappointed Customers

What Kentucky Fried Chicken Can Teach Us About Saving Wildlife

On The Lack of Diversity in Hollywood