Speed ladders are overrated for speed and quickness development.

The problem with speed ladders is you get good at a narrow set of movement. There is a conditioning benefit and it will provide an initial boost to your foot speed and agility when you first start, so there is some value, but there are more productive uses of your time.

Dedicated practice mandates emulation of moves you might need during your sports activity. Most of the cutting and change-of-direction performed on a speed ladder will not translate to on-field play.

There are no situations in football, basketball, lacrosse, tennis, or even soccer that call for an “Ickey Shuffle”.

“But Kene, speed ladders are proven to help athletes move faster and quicker on the field. Lots of sports programs use them.”

Yes, they have some ancillary impact on athletic ability, but if you are going to make that argument, why not just train with exercises that have a bigger, more direct impact on your movement to begin with?

People who use speed ladders tend to be more dedicated to attaining peak athletic performance than those who don’t, so the big-time athletes who use ladders are almost certainly doing other training—position drills, sprints—that have an impact on speed and quickness as well.

Speed ladder usage is an indicator of dedication to better foot speed and other performance metrics, not the proximate cause of it.

Rapid non-linear movement is also instinctual; if you have to think about juking the opponent charging at you, it’s already too late. You need to react instantly to anything you see if you want to achieve maximum quickness. Deliberate thought slows you down.

Speed ladders will only ingrain movement that helps you perform the specific actions required for the speed ladder exercises you are doing—that is it. Consciously transferring the movements you practice on the speed ladder to in-game situations on the field is nearly impossible.

This is why it is silly to have (american) football players run long distances for in-game conditioning. It does not mimic the kind of activity you will be performing in the game, the frequent starts and stops and all-out bursts of energy that last a few seconds on average. Sprinting and running routes for conditioning takes care of that.

Leave the post-practice mile runs to the cross-country team.

Yes, there’s some positive residual from the mental toughness instilled from regularly completing long runs, but it does little for your performance in vital areas. Distance runs don’t build your VO2 max (i.e. your “Lungs”), your top speed, your acceleration, or agility—all they do is invite repetitive motion injuries and sap energy.

Poor leaders run their troops into the ground before the battle even begins. Conditioning runs are universally despised. Most players dread summer workouts and the end of practices because of it. It’s so feared that it drives many a player away from organized football.

(To which some might say, “Good riddance. We don’t want soft players on this team”. The problem is, some of those players who quit because of conditioning drills have talent, and might be solid contributors to a winning program.) 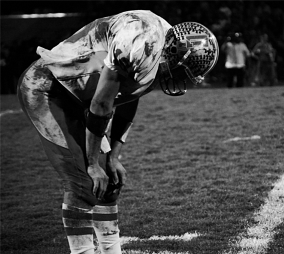 You’re not Bear Bryant and this is not Junction.

Winners do what losers aren’t willing to do, including taking a hammer to conventional wisdom.

So, what kind of movements enhance acceleration, agility, and foot speed?

Start by getting in solid, physical shape.

The more fat you are carrying, the more dead weight you have to lug around while running and jumping. Up your protein intake and do some reading on what constitutes a healthy diet. You want to lift weights and do some sport-specific training several times a week.

Even if you don’t play sports, high-intensity training is fantastic. It creates leaner, more attractive shapes for both men and women.

Form follows function; If you want to look like the people you see on television, you have to train like them.

I promise it will not turn you into The Hulk.

This is a good general workout to start with.

Develop the general skills that impact your strength, rate of movement (how fast you move a part of your body), and speed.

Plyometrics and weight lifting help with that. If you have position-specific movements that are frequent, like making a 90-degree cut to run an “out route”, practice running the actual route at full speed. Not only will it build up your lungs, you will get better at performing the movement efficiently and effortlessly.

Repetition is key; the more you do an activity, the better you get at doing it.

I will post three exercises that help sports performance in my next article, as well as other resources for building a good plyometric program.

Guess Who
Getting Yours: A (Very Short) Guide to Getting What You Want Without Poisoning The Well
Overeating: A Path to Good Health?

Three Exercises to Build Speed and Quickness (Vertical Jump, too)

Squats: Why Aren’t You Doing Them?